The story of Bilingual Qurbana in North America 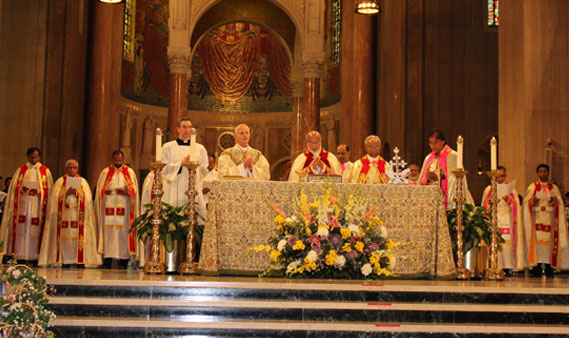 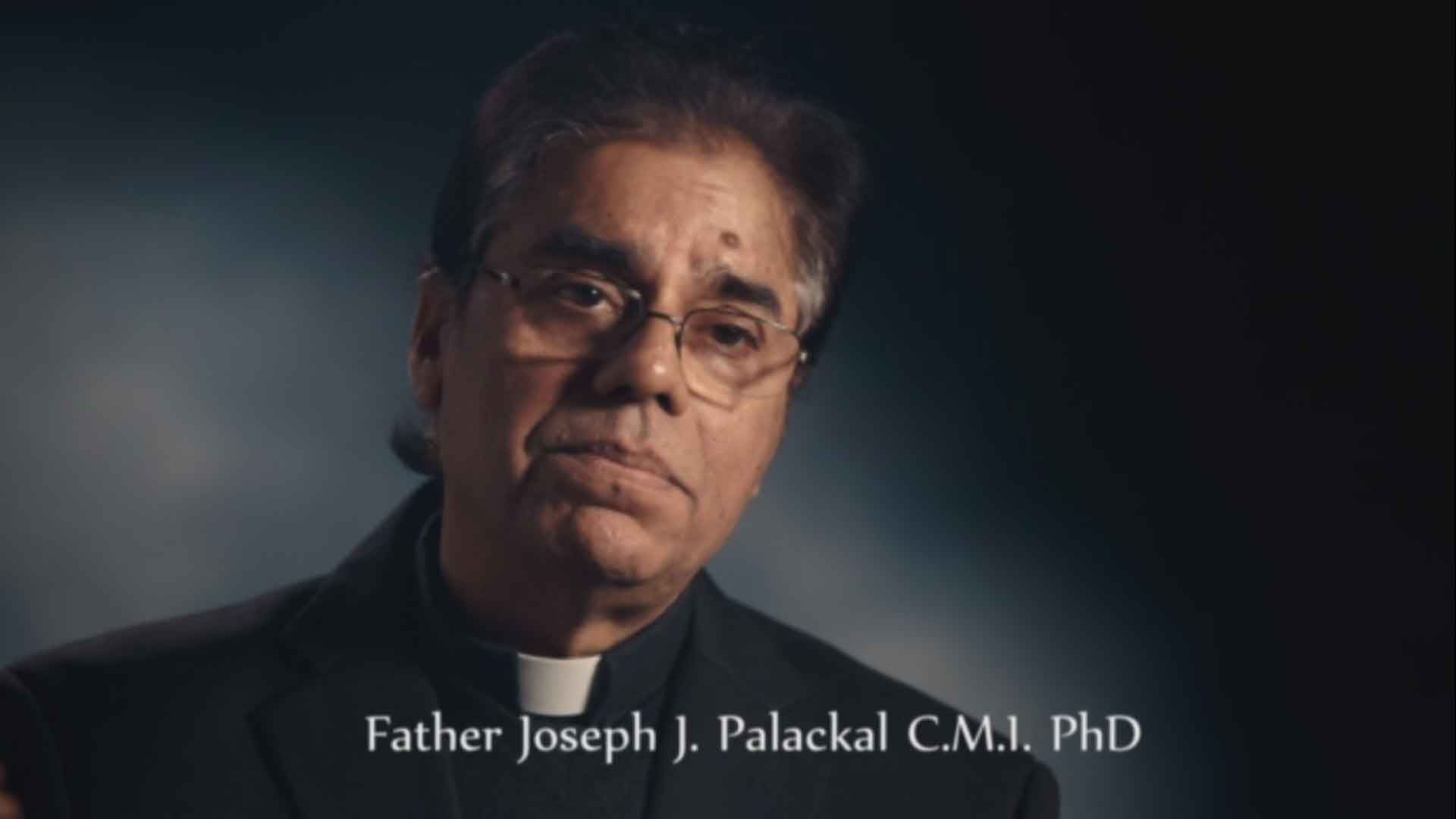 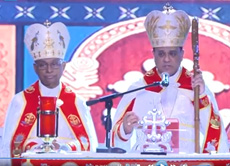 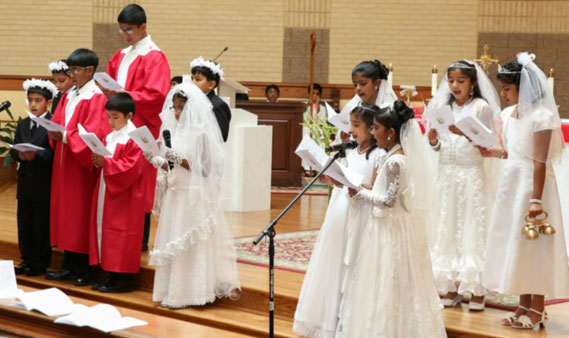 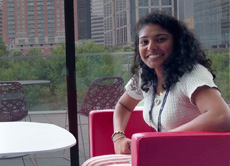 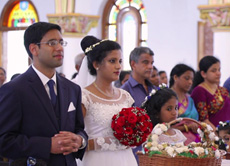 Aramaic Project 149 - Bilingual Nuptial Qurbana wedding of Anija and George Njarakunnel at the National Shrine and Basilica of the Immaculate Conception in Washington, D. C, 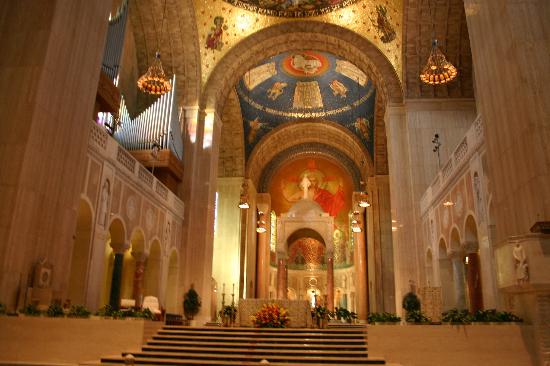 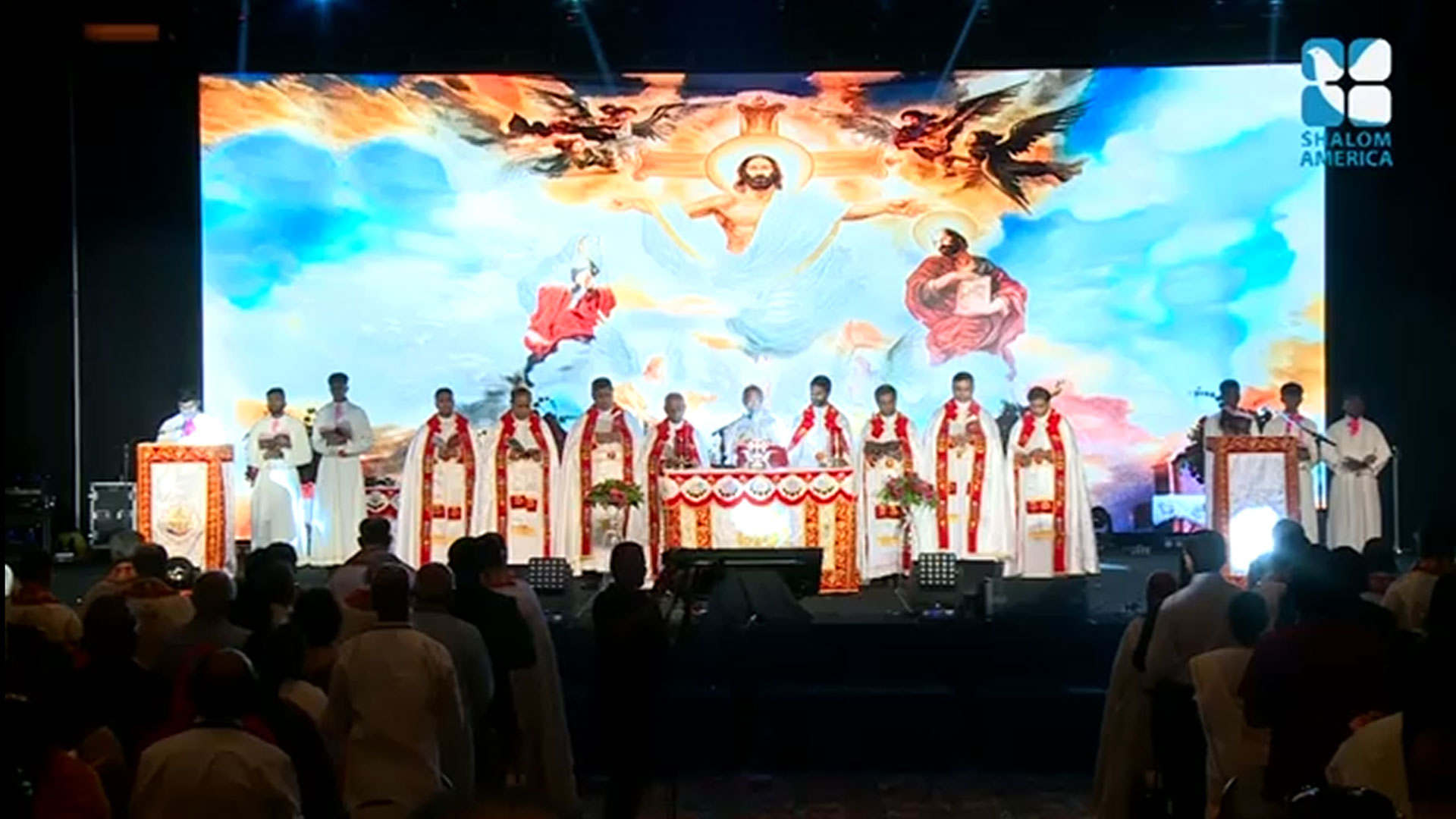 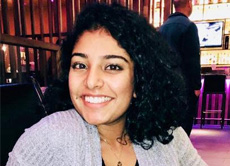 The Syriac heritage of the Syro Malabar Church is an essential component of the cultural fabric of India. The St. Thomas Christians had the privilege of receiving the faith directly from the Aramaic-speaking Thomas. Probably, the early converts learned the original version of the Lord’s Prayer, which, in effect, is the entire Gospel in a nutshell, in the Galilean Aramaic from the Apostle. The exuberant outburst of the Apostle --- Mār walāh (“My Lord and my God”)--- would have been enough for a functioning Creed. All these happened before the Christian Aramaic (i.e., Syriac) bifurcated into two different traditions --- East Syriac (Chaldean) and West Syriac (Antiochene)--- by about the sixth century A.D. Due to particular historical trajectories, the St. Thomas Christians continued the East Syriac tradition until the early eighteenth century. Two of the eight independent churches among the St. St. Thomas Christians , the Syro Malabar Church and the Assyrian Church of the East, continued the liturgy in East Syriac until the middle of the twentieth century. As a result of the vernacularization of the liturgy, the sound the East Syriac language is gradually fading from the memories of the Syro Malabar Catholics. Ironically, the Syriac language continues to be a marker of identity in the name of the “Syro” (i. e., Syriac) Malabar Church. Due to the sheer negligence of the so-called Syro Malabar Catholics, the intangible cultural heritage of the world is being lost to humanity under our watch.

It is in this context that Fr. Joseph Palackal, CMI, stepped forward with the idea of the Aramaic Project, an internet-based library and archive, to preserve and propagate the sound, melodies, and memories of the Syriac language. Three years after the launch of the website, the CNN research team working on the Hollywood-style production of “Doubting Thomas” (the final episode of Finding Jesus: Faith, Facts, and Forgery) discovered Fr. Joseph Palackal and invited him to make a guest appearance in the program. He was the only resource person from Kerala to appear on the show. Last year, the American Library of Congress took note of the mission of Fr. Joseph Palackal and invited him to deliver the Benjamin Botkin Lecture 2018. The Library also documented an interview with Fr. Joseph Palackal.

In the recent past, Fr. Joseph Palackal has initiated an international discourse on the Syriac heritage of the Syro Malabar Church and the Christian dimension of India through his scholarly presentations at such esteemed academic institutions as Oxford, London (SOAS), Harvard, and Columbia Universities. He also presented several papers on related topics at the annual meetings of the Society for Ethnomusicology in the USA. The critically acclaimed book, “Music and World Christianities” (Oxford University Press, 2016), includes a chapter on the music of the Syro Malabar Church that Fr. Palackal wrote.

Beyond the academic arena, Fr. Palackal has been working on to give life to the sound of the East Syriac language by introducing Syriac chants to church choirs in the United States. The new generation of Syro Malabar Catholics in the USA are responding positively to Fr. Palackal’s idea and have started using Syriac chants as a means to reconnect with their past and reclaim their identity. By doing so, they may even change the conventional discourse on both India and Christianity, and change the linguistic soundscape of the United States of America. What follows is a report on the recent developments in the USA.

A new chapter is evolving in the history of East-Syriac chants among the expatriate Syro Malabar communities in North America. The idea of a bilingual (English/Syriac) Qurbana is gaining traction, especially among the Syro Malabar youth. It all started with an experiment that Fr. Joseph Palackal, CMI initiated during the solemn celebration of Qurbana at the Basilica of the National Shrine of the Immaculate Conception in Washington, D.C., on September 7, 2013. The occasion was the 16th annual pilgrimage to Our Lady of Good Health, Velankanni (there is a chapel dedicated to Annai Velankanni at this shrine). India Catholic Association organizes this annual event, which is open to Catholics who migrated from the Indian subcontinent. In 2013, encouraged by Dr. Varghese Kannarkatt (1936-2017), the India Catholic Association agreed to have the Syro Malabar Qurbana in English with the musical setting by Fr. Joseph Palackal, CMI, and George Thaila . Major Archbishop Cardinal George Alencherry was the celebrant with Cardinal George Wurel, the Archbishop of Washington, D. C. as co-celebrant. Fr. Palackal sought permission from Cardinal Alencherry in advance to introduce two Syriac chants: Puqdankon and Qandisa Alaha (see the correspondence). The choir consisted of 120 youngsters from the Syro Malabar communities across America. This was the first time the sound of Syriac chants reverberated inside the largest Catholic edifice in North America. This was also the first time most of the American-born Syro Malabar youngsters heard and sang Syriac chants. In subsequent years, Syriac chants became a topic of conversation. Whenever and wherever Fr. Palackal got an opportunity to celebrate solemn Qurbana in English in different parts of the USA, he tried to repeat what he did in Washington, D.C. Slowly, the seeds that were sown in Washington, D. C. started flowering.

The echoes of the Syriac chants traveled from the Basilica first to the suburbs of D. C. to St. Jude Syro Malabar Catholic Church in Northern Virginia. This is the home parish of Felix Simon, the co-founder of the Aramaic Project. The parish priest accepted the suggestion of Felix and allowed the First Communion children to learn the solemn form of the Lord’s prayer in Syriac, in 2014. The children sang the prayer in the traditional tune, after receiving communion (see Aramaic Project 21 ; Aramaic Project-21A ). In the following year, the First Communion children chanted the simple tune. The parish continues to incorporate Syriac chants into the celebration of Qurbana on the day of First Communion. The parish went a step further in 2018. On May 26, 2018, the First Communion children started the Eucharistic celebration by singing the famous Christological hymn,”Sagdinan Mar,” and reiterating their faith in the undivided humanity and divinity of Jesus, in the words of words of Mar Babai the Great ca. (551-628.

Currently, several Syro Malabar communities in America sing the Resurrection Hymn (Laku Mara) and the Trisagion (Qandisa Alaha) in Syriac. Ironically, the younger generation is more at home with singing Syriac chants. They do not seem to have the mental inhibition and emotional apathy that their parents have toward Syriac chants. Some of the youngsters see this as a way of connecting with the history of their forefathers and as a way to reclaim their identity. The church choirs are making extensive use of the resources available on the website for the Aramaic Project under the Christian Musicological Society of India.

The Syro Malabar convention 2019 at Hotel Hilton in Houston, Texas (August 1-4), was remarkable for the use of Syriac chants. Syriac chants were part of the celebration of Qurbana on all the four days of the Convention; on the first, and the final days, the Qurbana was in Malayalam and the other days in English. The two choirs that sang for the Qurbana were equally comfortable in singing Syriac chants. On the final day, the choir sang Sagdinan Mar as gathering song and Bar Maryam as the concluding song. Remarkably, the missal prepared for this occasion included Syriac chants in Malayalam and English transliteration. It was a semi-official recognition of the efforts of Fr. Palackal, who was a guest lecturer at the Convention. On the third day of the Convention, Bishop Joy Alappat, Auxiliary Bishop of Chicago, publically acknowledged Fr. Palackal’s contribution to the Syro Malabar Church in North America .

The table below shows a partial list of celebrations that included Syriac chants in different parts of America in the recent past.

If this trend continues, the nature of Syro Malabar liturgy might change considerably in the distant future. The advantage is that the next generation will be able to learn theology through chants. In the Syriac era, liturgical texts also served as catechetical tools. The prime examples are the Christological chants, Sagdinan Mar , and Bar Maryam . Such chant texts defy translation, especially into the Malayalam poetic-rhythmic meters. The Syro Malabar Church pushed such chants into oblivion. That was an easy solution, not a productive one.

The young Syro Malabar Catholics, who appear in the Aramaic Project videos 147, Aramaic Project-148 , and Aramaic Project-150 , give us hope by expressing their willingness to own the Syriac heritage that their parents’ generation disowned. By singing Syriac chants, the Syro Malabar youth will alter the linguistic sound map of North America and also contribute to preserving an intangible cultural heritage of humanity. It is possible that in the distant future, the sound of East Syriac may fade from the memories of the Syro Malabar Catholics in Kerala and survive among the expatriate communities in America.

The three founding Fathers of the CMI Congregation, who happened to be Malpan-s, will have a hearty conversation in heaven!

The table below shows a partial list of celebrations that included Syriac chants in different parts of America in the recent past. Date/Location/Church Celebrants 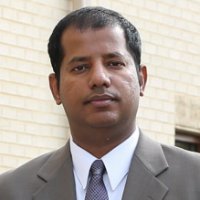 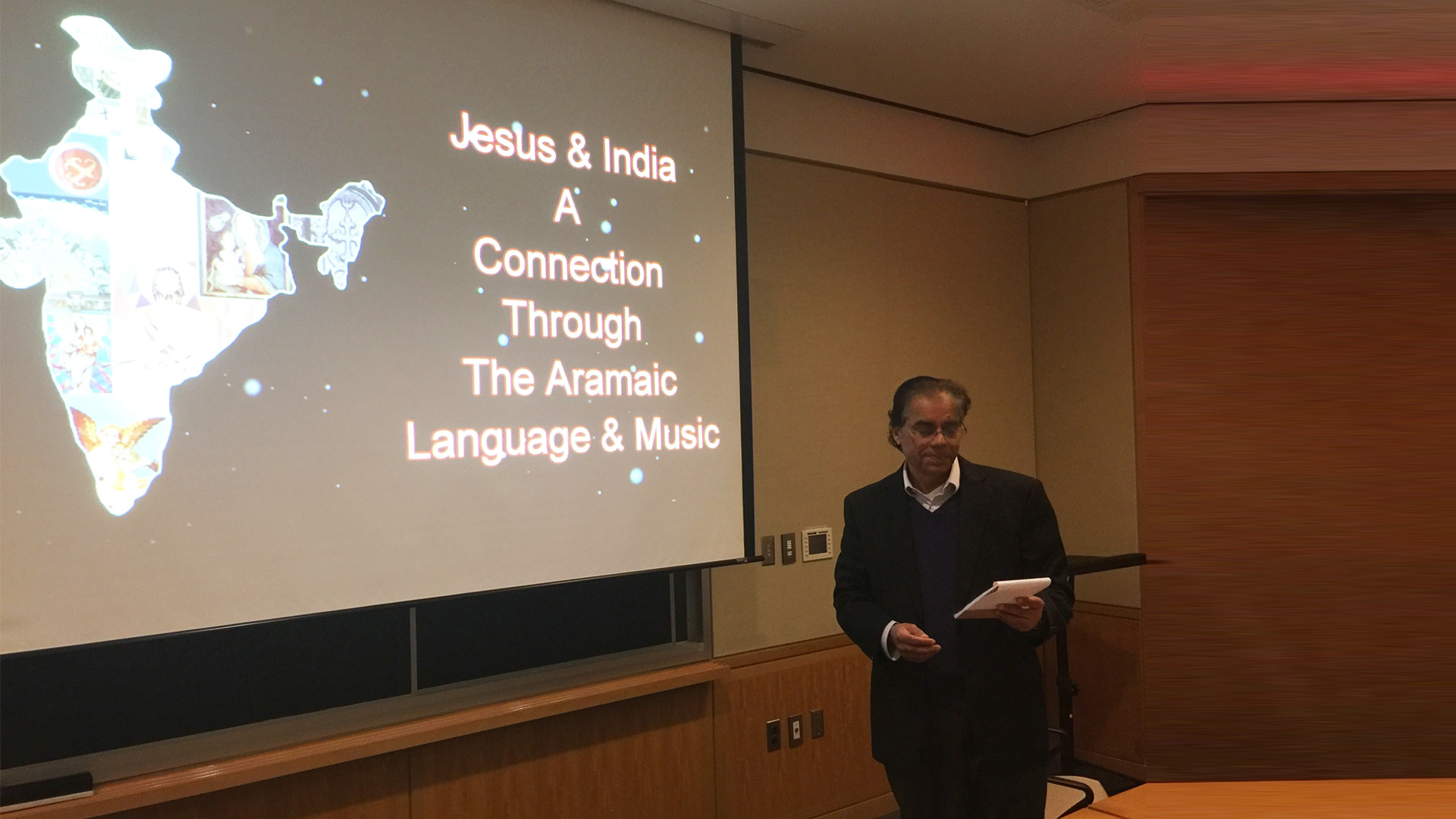 Aramaic Projec 55 - A Film Presentation by Dr. Joseph Palackal during the Conference on the Music of South, Central and West Asia. at Harvard University in March 2016 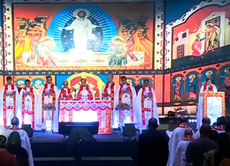 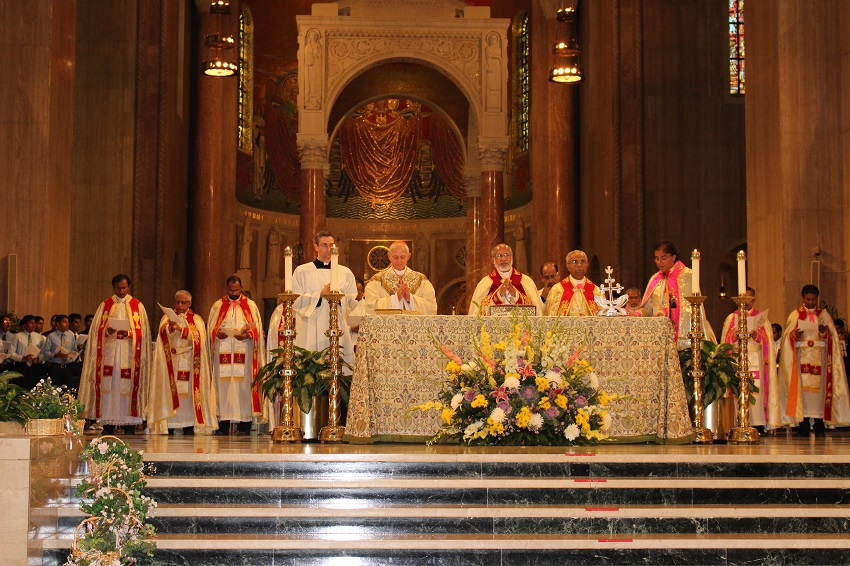 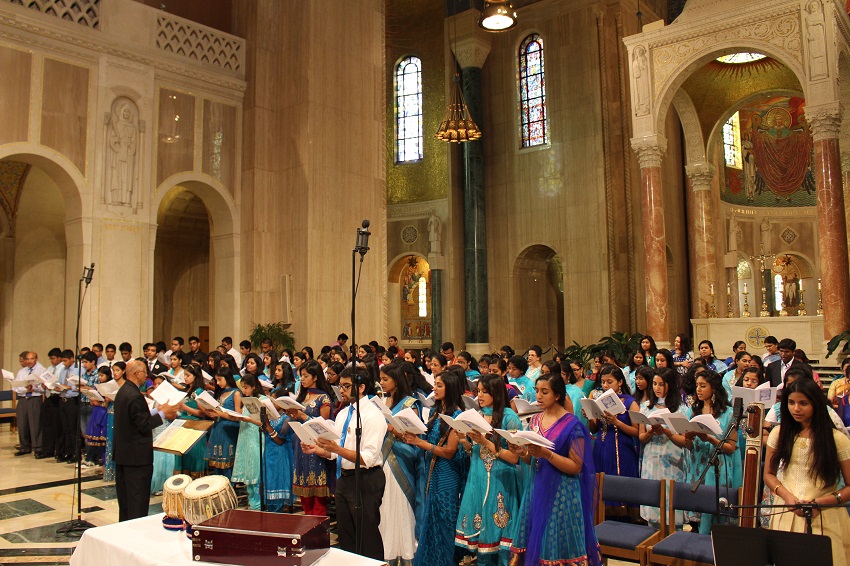 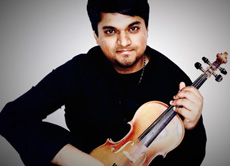 Aramaic Project-150 - S. Sebastian Ottaplackal:, a music educator, but also a seeker of the Syriac heritage of his forefathers during the Syro Malabar Convention in Houston, Texas 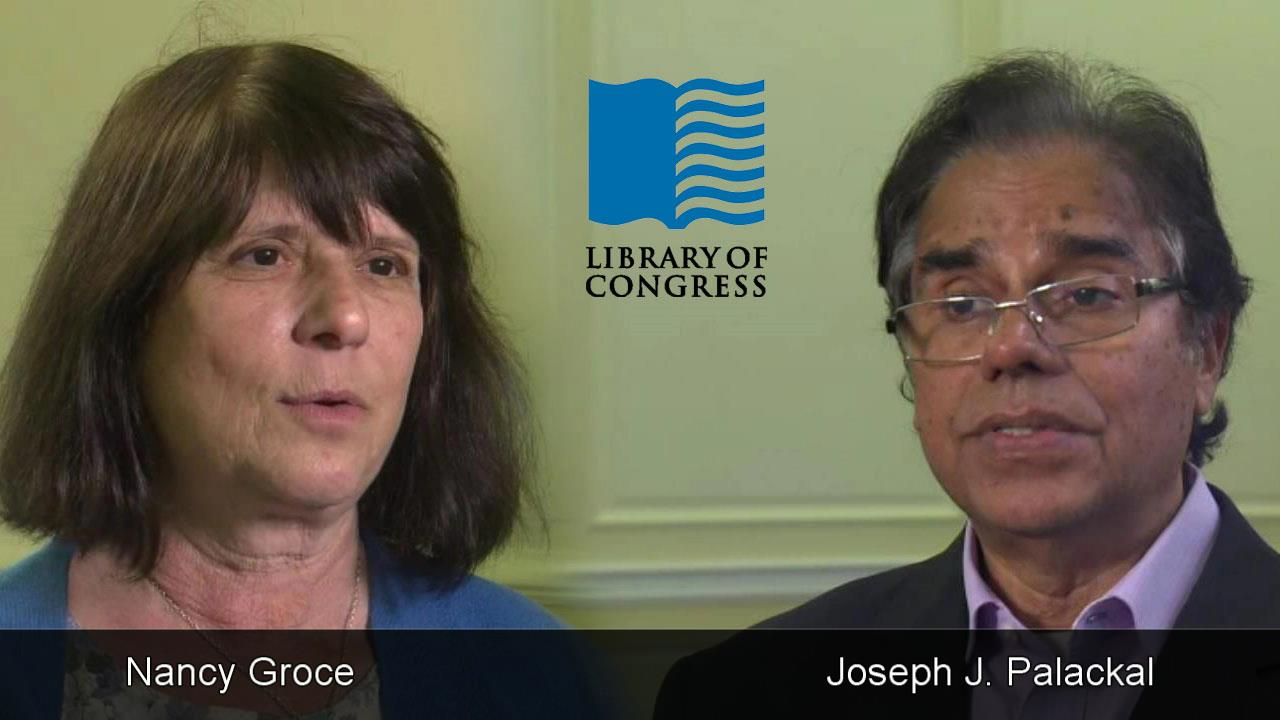 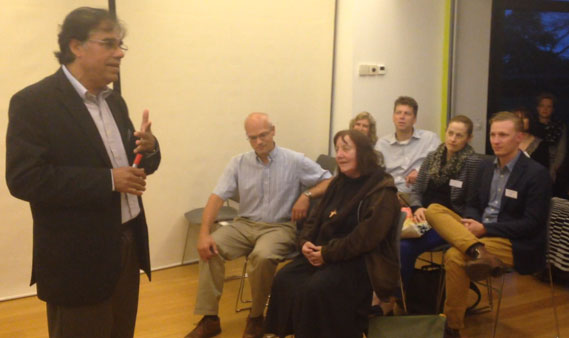 If this trend continues, the nature of Syro Malabar liturgy might change considerably in the distant future. The advantage is that the next generation will be able to learn theology through chants. In the Syriac era, liturgical texts also served as catechetical tools. The prime examples are the Christological chants, Sagdinan Mar, and Bar Maryam. Such chant texts defy translation, especially into the Malayalam poetic-rhythmic meters. The Syro Malabar Church pushed such chants into oblivion. That was an easy solution, not a productive one.

Publish modules to the "offcanvs" position.